Again we are bystanders who are defenceless in the face of plotting of governments and bodies mainly western European and western European American but by no means is it limited to them. The Chinese also are plotting and planning to asset strip Africa of its huge mineral wealth. But, the Chinese are not interested in culling our population whether that be in Africa or around the world that we know of.

The Children of Israel need to be aware of the conspiracy against them, not conspiracy theories but conspiracy fact. These organisations which include governments have made no secret of their desire and planning to reduce the population of the Children of Israel around the planet but most of all on the continent of Africa. The French president has said openly that it is a priority of the western world to reduce the birth rate in Africa. Also, Bill Gates, the Microsoft founder, has established a foundation backed with his billions of dollars with the sole purpose of reducing the fertility of African women and slowing the birth rate. This is the official position of the American government and if we are to assume that the French President speaks with the authority of the French state then we have to assume that this is the official policy of the French government.

The arrogance of the western Europeans is not new, it is only the ignorant of history who would assume that European governments and ruling elites are being altruistic in their government aid and offer of funding for particular vaccination projects for the poor in Africa. In the past the British, French and the Belgian states and ruling elites massacred millions upon millions of the Children of Israel and this was honest population control because they didn’t hide this fact. And, this was at a time when they needed Israelite slave labour to help strip the land of mineral wealth as well as free labour to produce sugar and cotton as well as other crops. We are now living in an age where they no longer power their insatiable consumerism of the world resources with free slave labour but with machines, it seems that they have no need for us. They openly discuss our population control and reduction of fertility and do so with the consent of the corrupt African governments who are so willing to accept the foreign governments subsidies to buy their silence, which always ends up in Swiss bank accounts which funds lavish trips to Europe and education for their children. Can you imagine if the Chinese or Russians were doing exactly the same thing to the western Europeans and Western Europeans in America? There would be complete outrage and possibly war.

Their excuse or justification for the plotting against our continued existence on the planet is that they wish to see the end of poverty in Africa. I would take this reasoning serious but I would have to completely remove from my mind the existence of the IMF and the World Bank which cripples Africa with interest on loans they were forced to take out by economic wolves coming out of America. And, no doubt there are some of those loans which were taken out by these corrupt governments which may have been for the purposes which were legitimate but it makes you wonder why would someone take out a loan with crippling interest rates which the country is ill-able to afford to repay even without interest. If the western governments and Americans were really interested in the alleviation of poverty in Africa they would simply cancel the debt. The cost of doing that in financial terms would be cheaper and the economies would be able to grow and support the African governments through taxes. No, they will not do this because it would mean a loss of control. The ability to tell the governments who are in debt what they can spend their budgets on and what they can invest in terms of their infrastructure is a much more powerful tool. America and Europe use this power to protect their own farming industries and secondary industries by forcing the African countries to sell their resources at virtually rock bottom prices or even to give rights to mine those resources to American and European owned companies for long periods at virtually no cost so as not to be treated harshly in satisfaction of the debt.

So, we know all this interest in Israelite fertility rates and population isn’t anything to do with helping Hebrew economies nor that they care about our health so, we can stop pretending. The western Europeans want us out the way for at least three reasons: firstly, they want the African landmass as a backup plan; secondly, they want our resources; thirdly, they believe there are simply too many people on the planet eating away at the dwindling resources and the Children of Israel have no power to protect themselves.

This state of affairs is almost unbelievable. We have another people planning and plotting to attack our women’s fertility which is a direct existential threat against the Children of Israel and in the same breath we have governments in Africa welcoming these NGO’s into Africa to mass vaccinate the female population in order to reduce their fertility but under the guise of preventing disease and boosting the economy. This state of affairs cannot continue. We can no longer just accept this status quo as being our default situation. We must begin to feel that this situation is an emergency and an immediate threat to our existence as a people. The collective psychosis and inertia of our people in regards to our security and safety on the planet is now an existential threat to ourselves. We are simply not able to protect ourselves nor offer resistance militarily, biologically and economically. The Hebrew people are in a state of complete vulnerability and at the mercy of virtually any nation who wishes to take advantage. And, it seems that we are so vulnerable that the wombs of our mothers are now the geopolitical property of those who have designs on our resources or who have concerns about the dwindling resources on the planet.

We need to the take lessons from these once colonised and so called backward nations. These people first loved themselves and then their eventual rise to success materialised. There will be no motivation to do anything for our concept if we do not love ourselves because if we do not value ourselves we will never feel the need to protect, invest or honour. If we are divided then it will be easy to pick us off and turn each other against ourselves. The divide and rule has always and will always benefit our enemies and those who wish to see us in a degenerated state.

If the protection of the wombs of our mothers is not a wake-up call to us as a people then I’m not sure what it will actually take to jolt us into action to do the things needed to make us operate in a natural way towards ourselves.

1 Comment on “Population control of The Children of Israel in Africa and the Diaspora.”

Racism within the Muslim community: Should we care

Racism within the Muslim community: Should we care 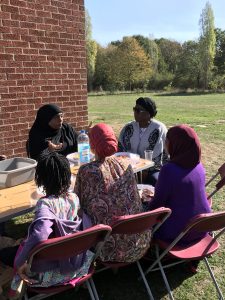